NEW DELHI: At least 28% of 40,184 people who tested positive for Covid-19 between January 22 and April 30 in India was asymptomatic, a study conducted by the Indian Council for Medical Research (ICMR), which highlights that a large proportion of the tested and found positive were family contacts that did not exhibit symptoms.

Asymptomatic cases also include health care workers in contact with positive cases without adequate protection, although these constitute only 2.8% of positive cases. Between January 22 and April 30, more than 10.21 lakh people were tested for Covid-19, of which 40,184 or 3.9% were positive.

On April 21, the ICMR said 69% of the positive cases were asymptomatic, which was a much higher number. Till then, only about four lakh specimens were tested for Covid-19 in India and only 18,601 were positive. The latest study pointed out that testing has increased several times over the eight weeks from 250 individuals per week. Day in early March to 50,000 per day. Day at the end of April. A significant over 44% of the positive cases are identified as under the “no specified” category. 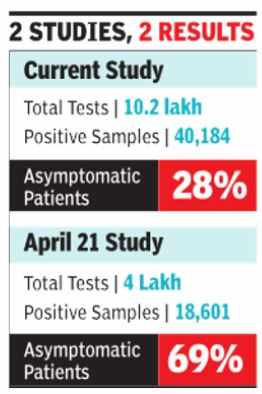 Officials said the percentage of asymptomatic people is likely to be more as many have not been able to provide details correctly. However, the spread in the wider population is being traced by periodic increases in the test area, with serological studies of low and high risk categories as the newest measure. The study shows that Covid-19 cases were most common among close contacts and affected men and elderly more.

According to the study published in Indian Journal of Medical Research (IJMR), of the 28.1% asymptomatic patients, 25.3% were direct and high-risk contacts in the positive cases. The frequency of attacks (per million) by age was highest among those aged 50-69 years (63.3) and was lowest among those under 10 years (6.1). The rate of attack was higher among men, as 41.6 of them tested positive, while 24.3 of women got the infection. Attack rate is people who are influenced by or positivity rate in a particular age group.

Among 12,810 cases with reported symptoms at the time of sample collection, cough and fever were the most frequently reported, while approx. one third reported sore throat and shortness of breath. At least 5% of cases reported gastrointestinal symptoms such as abdominal pain, nausea, vomiting and diarrhea.

More than 71% districts of the 736 total districts in the country reported cases infected with the virus. States with the highest proportion of districts reporting positive cases included Delhi, Maharashtra, Kerala, Punjab, Haryana, Tamil Nadu, Andhra Pradesh and Gujarat. The states and UTs with the highest test positivity were Maharashtra (10.6%), Delhi (7.8%), Gujarat (6.3%), Madhya Pradesh (6.1%) and West Bengal (5.8%) ).